skip to main | skip to sidebar

The food chemists have prayed for inspiration and imagination and because we water and tend both like we would an organice herb garden, a new flavor has sprouted for your tasting pleasure. If you've been following our website (even possibly setting it as your home page; it's never too late), you might have already noticed that the fashionably late and mightily tasty Cinnamon Swirl marshmallow has finally arrived. Actually it arrived a short time back, but the lazy, err busy, blog writer is fashionably late to tell the world about it. D'oh. 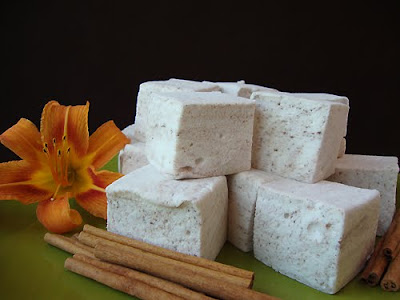 One among our faithful readers is actually responsible for the idea that led us to research and design the Cinnamon Swirl you see before you. Great thinker, we salute you. The Cinnamon Swirl mallow has the cutest brown freckles all about it and a sweet after-taste that folks have really enjoyed, making it The Flavor Of The Month. There has already been a very positive response from our base of die-hard mallowers and we have decided to make it a permanent part of the Mia Mallows world.

Behind the scenes at Mia Mallows, we are always in touch with our callers, e-mailers, and the handful of letter writers who are probably waiting for a printed version of this blog to arrive, um, one day I suppose . . . In reality it's the folks who come forward and communicate their ideas and themes that keep our shop busy and constantly improving.
A customer once asked about adults appreciating the flavor as much as kids. From what we've heard, some adults have treated our mallows much like tourists treat the Blarney Stone. It's been discovered that at least one child somewhere in this world has gone without after his or her parents tasted their order first. Sneaky parents are probably smirking and looking down in shame and guilt at this moment.

One customer we spoke with recently said he started eating 1 mallow per day only to give into temptation and doubled his dosage without first consulting his physician. Sadly in the end all he had left was a ravaged box void of everything but mallow wrappers and labels. I hope his replacement order arrived before the cravings did him in; he's a great customer. Please note that there are no habit forming or addiction warnings affixed to our packaging but in the case of cravings during summertime travel, take pleasure in knowing that we ship world-wide.

During month of September every order will include a sample of this new Cinnamon Swirl Marshmallow.
Posted by Mimi-MiaMallows at 7:02 PM No comments: